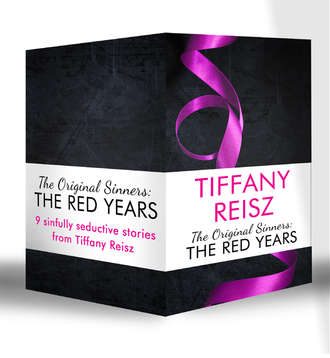 The Original Sinners: The Red Years

The Original Sinners: The Red Years collection contains four unforgettable, erotic stories and one tantalising, provocative novella collection.THE SIREN Some love stories you never forget.She tore herself from the man she adored, who transformed her, who possessed her… who would have destroyed her.Now, she is adored by a man she must not have.Some books will change your world.She thinks she knows what it means to be pushed to her limits.She’s wrong.Be prepared… this is one of them.THE ANGELShe wanted him…Nora Sutherlin is hiding. On paper, she’s following her master’s orders – and her flesh is willing.More deeply, more strongly than she’d wanted anyoneBut her mind is wandering to a man from her past, whose hold on her heart is less bruising, but whose absence is no less painful. Instead of letting him make love to her, she’d let him go.This is the story of a summer that proves that love hurts.THE PRINCEOne man taught her to love…She left her old life for him. Now Nora is torn in two, wanting to fit into this new, innocent relationship, yet relentlessly hungering for her darker self…and Søren, the man she left behind.One man taught her to obey…While Nora’s trying on innocence for size, Søren is stepping ever further into decadence, determined to block out the agony of watching Nora walk away. Wills she ever choose to return to their life of glorious, addictive sin?Which man would you crave?THE MISTRESSShe is addictive… irresistible.Nora Sutherlin, Dominatrix-turned-literary-star, is held prisoner by two dangerous men. Under different circumstances she would enjoy this immensely. These men aren’t lovers, however, but tools of vengeance from an old adversary.Possessor of the hearts of two men, she plays her hardest hand.But her captor isn’t interested in play. Or pity. In Nora’s world, however, no one is ever truly powerless. Her friends and lovers will do anything to save her – even if the only certainty seems to be sacrifice and heartbreak.The stakes are high in a dangerous game of love, lust and passion.THE MISTRESS FILES: The Case of the Acting Actress, The Case of the Diffident Dom, The Case of the Reluctant Rock Star, The Case of the Secret Switch, The Case of the Broken BartenderWelcome to the private files of Nora Sutherlin, The Mistress.Kingsley Edge, owner of the 8th Circle BDSM club, has ordered her to compose client profiles so the other Dominatrices in his employ can learn from her expert erotic encounters. She’s the best Dominatrix at the club and her clients always leave satisfied.The Mistress’s first five cases are anything but vanilla…1. The young actress known as “America’s Sweetheart” who definitely isn’t innocent.2. The ex-Dom whose wife wants to experience the pleasure of domination – Nora can convince him to trust his wife’s desires.3. The rock star who says he’s researching a music video, but whose arousal makes Nora determined to prove he’s a sub.4 .The special client who’s secretly a Switch like Nora, both dominant and submissive, and only comes to her when he wants pain.5. The woman with a very unique request, who Nora will never see in her dungeon again…